After the statements were reported in ‘The Hindu’ and ‘The Indian Express’, we wrote letter to Mrs. Kamalini requesting for a copy of the report to be furnished to us. Till date no reply has come and neither has any report been furnished to us.

Meanwhile trustees had concocted a false report against all we five sisters based on which the trustees were trying to expel us. Since the starting point of the report was our sexual harassment, to safeguard our interests we were constrained to personally go to Delhi and met NCW Chairperson.

Luckily for us Dr. Girija Vyas had replaced Mrs. Poornima Advani. We met Dr. Girija Vyas, Chairperson of NCW, and Mrs. Nirmala Sitharaman, South Zone Head of NCW, both of whom were genuinely concerned for our welfare. In spite of their thorough search they were unable to unearth the report as mentioned on 19.01.2005 news-item, allegedly submitted to Mrs. Poornima Advani by Mrs. S. Kamalini.

Having seen our miserable plight Dr. Girija Vyas decided to reopen our case. We received a letter directing us to appear and submit our complaints to NCW, New Delhi. Since we were not in a position to appear in person, we sent by RPAD our representations dated 21.07.2005 to NCW in Case No.8/4047/04/NCW/JA/CP/179. Thereafter our case had been directed to be investigated by the Department of Women and Child Development, Pondicherry (DWCD).

Mrs. Devi Matthews, the Director of DWCD issued us summons. We appeared before Mrs. Devi Matthews and the Deputy Director Mrs. Meena. Our condition had worsened and they too were shocked at our victimization. Mrs. Matthews asked the trustees to reply in the course of her investigation but they gave very vague answers. The harassment reached another climax when Arunashri was brutally beaten up. (see posting dated 29.12.2006)

We met Mr. T.M. Balakrishnan, I.A.S., Hon’ble Secretary (Welfare), Pondicherry, and Mrs. Devi Matthews on 02.01.2007 at the Chief Secretariat, Pondicherry, expressing our fear, insecurity, harassment and sexual harassment faced by us. They were both very concerned and promised to do something. 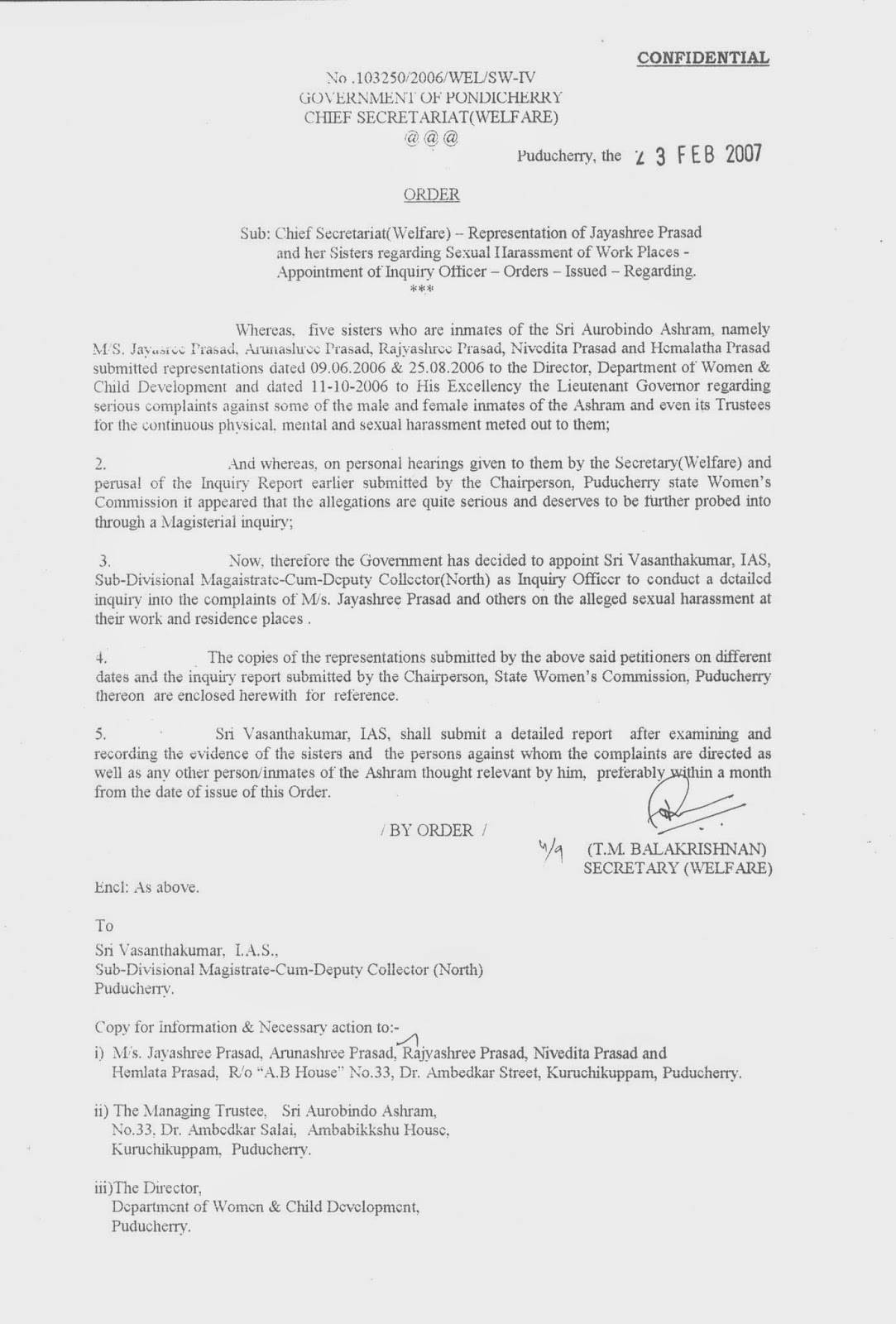