On 02.12.2014 the contempt petition filed against us is listed before the Supreme Court and we are constrained to appear before the Court on that day. With great difficulty and hardship we have managed to make the very basic arrangements for our travel.

However we have come to know that apparently the trustees are going to submit before the Supreme Court that they have or will arrange alternate accommodation for the five sisters and we should be shifted thereto and get orders to that effect. If the Supreme Court is inclined to grant the trustees' prayer then it will be unlawfully modifying its own order dated 29.04.2014 through a contempt petition and this will be totally against the principles of natural justice and the prescribed law and common sense, especially since at the first instance the Supreme Court had failed to take the submissions made by the trustees in their reply to our SLP with regard to payment of expenses to us.

It may also be noted that the trustees have not made the above claim in their contempt petition filed by them and they cannot now come forward with such a plea after having illegally and forcibly implemented the order dated 29.04.2014 by stopping our food, medical and all other facilities and amenities extended to every inmate of the Ashram.

The trustees will be once again trying to cunningly gain the sympathy of the court using devious means by projecting false goodwill. We sincerely hope that at least this time round the Supreme Court will be wise enough to see through their malice and ill-intentions and will not indulge in further miscarriage of justice.
Posted by Unknown at 08:30 No comments:

Order dated 13.10.2014 passed at Hon’ble Supreme Court by Justice S.J. Mukhopadhaya and Justice Bobde directing the Pondicherry Police to arrest the five sisters has been executed. This bailable arrest warrant had been issued in spite of the Registrar of the Supreme Court as well as the Chief Justice of India and Justice Mukhopadhaya having received letter from us stating that we were unable to appear since we had no means to bear the expenses of travel and lodging and food. This order of bailable arrest was totally insensitive and in gross violation of principles of natural justice. It also clearly indicated the prejudice and inclination of the judges in favor of the Ashram trustees.

On 18.11.2014, between 1.00-2.00 p.m. the Pondicherry Police headed by Mr. Ravikumar, SP (North), came with this whole team to Ambabhikshu House, wherein we sisters are residing, to execute the arrest warrant issued by the Hon’ble Supreme Court in connection to an alleged contempt of court. He was accompanied by women police personnel who arrested us and took us to the ‘All Women Police Station’. There we were shown the order and explained its consequences. After due formalities were completed we were each issued a 'Memo of Arrest' and allowed to leave the police station on the surety of two well-wishers. Thank you both, we are deeply indebted and grateful for the risks you have taken on our behalf to protect us and safeguard our well-being and interests.

We also take this opportunity to sincerely thank Mr. Ravikumar, SP (North), and his whole team of police personnel who treated us with extreme consideration and extended all possible help to facilitate the smooth execution of the procedure. This is the first time we have received such goodwill from the police and we are extremely grateful for the same. We have also assured Mr. Ravikumar that we shall make all possible efforts to present ourselves on 02.12.2014 before the Hon’ble Supreme Court.
Posted by Unknown at 10:00 No comments:

Many Thanks to His Excellency, Sri Ravishankar Prasad-ji

Our case is a case in point where judges of Supreme Court of India – Justice S.J. Mukhopadhaya and Justice R. Gogoi – have passed an inexecutable order on 29.04.2014. They have directed us to vacate “suit premises” in a case not pertaining to dispute of property and where no schedule of property has been mentioned. Moreover, to add insult to the injury, Justice S.J. Mukhopadhaya and Justice Bobde have now found us guilty of contempt in the contempt proceedings filed by trustees against us and have even issued arrest warrant against we five sisters for non-compliance. This warrant has as yet to reach the hands of the Pondicherry police for execution.

Assuming that the judges and the trustees of the Ashram feel that the accommodation wherein we are presently residing is the property we sisters ought to vacate, if we moved into any other Ashram property i.e. Ashram Main Building or Nanteuil or Golconde Guest House, etc. does it tantamount to obedience? Obviously not, because the trustees, with the help of these corrupt judges, are trying to throw us out of the Ashram and that includes all the properties belonging either to the Ashram or its various trusts within trusts.

Thankfully for us, we had also marked copies of our letter dated 10.06.2014 and reminder dated 17.07.2014 to the Hon’ble Minister of Law and Justice, Sri Ravishankar Prasad-ji. And to our greatest surprise, close on the heels of the directions issued by the Home Ministry, on 30.10.2014 we have received a letter from the Ministry of Justice which speaks volumes for itself without saying anything. I hope the Supreme Court, headed by and consisting of the three musketeer bench – Justice S.J. Mukhopadhaya, Justice R. Gogoi and Justice Bobde – comes up with suitable answers.

This letter is reproduced hereunder. 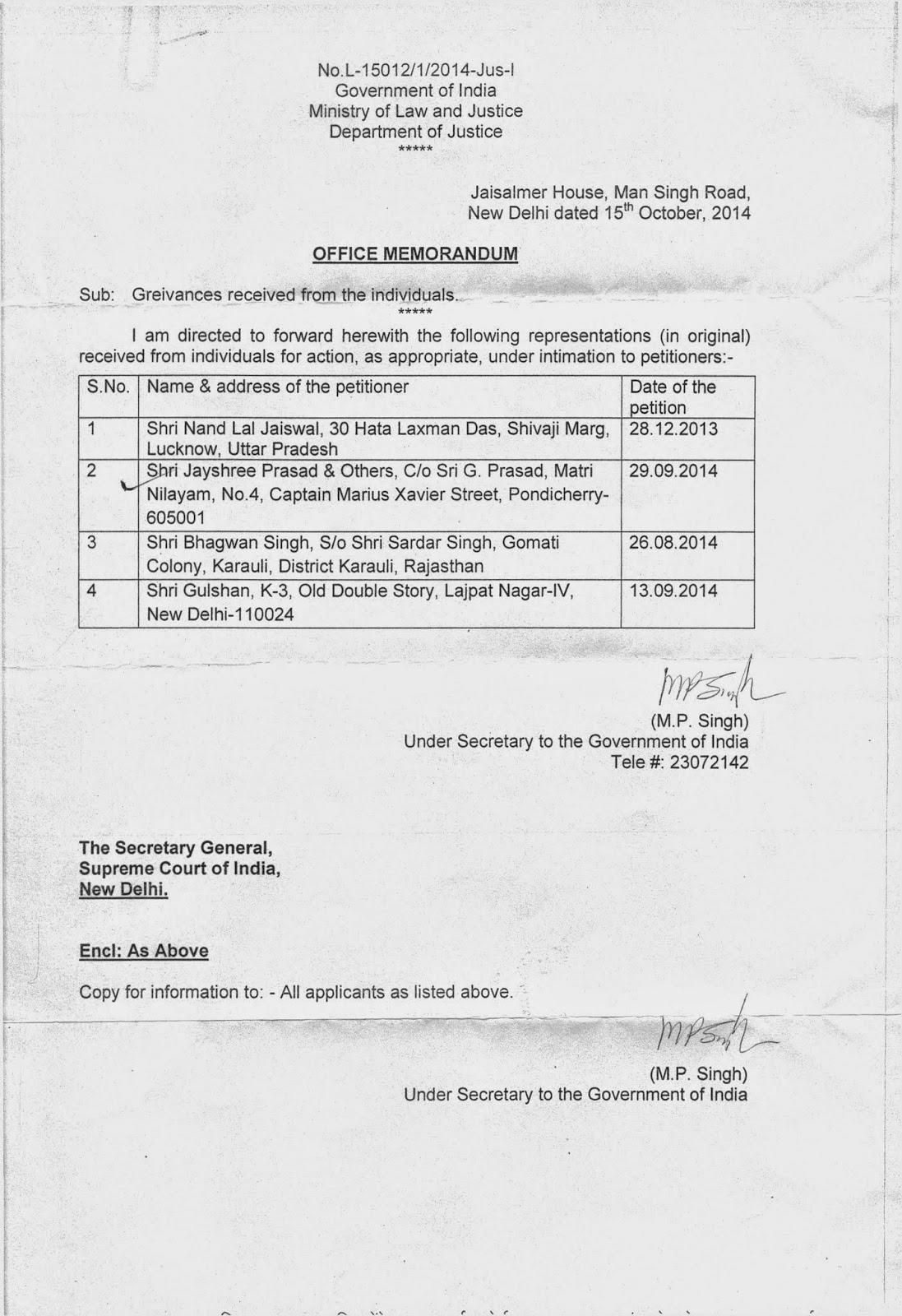 Our Heartfelt Gratitude to His Excellency, Sri Rajnath Singh-ji

It is with deep gratitude we wish to thank Sri Rajnath Singh-ji, the Hon’ble Home Minister of India.

As early as on 10.06.2014 and then through a reminder on 17.07.2014 we had written to the Hon’ble Home Minister informing him about our sorry plight and we had requested him to intervene since two judges of Supreme Court of India – Justice S.J. Mukhopadhaya and Justice R. Gogoi – had misused their powers of superintendence, causing us great harm and unimaginable hardship.

We had made these representations as a last attempt to get some justice and mercifully for us the Hon’ble Home Minister has heard our cry of help and is making attempts to curb and curtail the misdeeds of the trustees and the compromised judges, as well as prevent miscarriage of justice for granting us relief. This is an onerous task requiring great tact, diplomacy and goodwill, and we are extremely grateful to Sri Rajnath Singh-ji who is genuinely trying to help us.

On 25.10.2014 we received two letters from the Govt. of Pondicherry intimating to us that our complaints to the Home Ministry have been forwarded to it, who in turn has directed the Collector and IGP of Pondicherry to take immediate action and send report.

On receipt of these letters on 27.10.2014 we tried to meet first the IGP but he was out of station. But we were informed that due process of law will be followed and we will be kept abreast of things.

Thereafter on 29.10.2014 we went to meet the Collector. Unfortunately he was not available in his office so we were directed to the Special Officer, who gave us a very patient and sympathetic hearing. We also met the Revenue Officer, who intimated to us that our complaint dated 10.06.2014 had reached their office already. Thereafter the Deputy Collector also heard in detail about our stressful circumstances and was considerate enough to assure us that matters would be dealt with expeditiously. We would like to thank all these Officials who have given us some hope.

We pray that the report is submitted soon and gives us much-awaited relief.

These letters are produced hereunder. 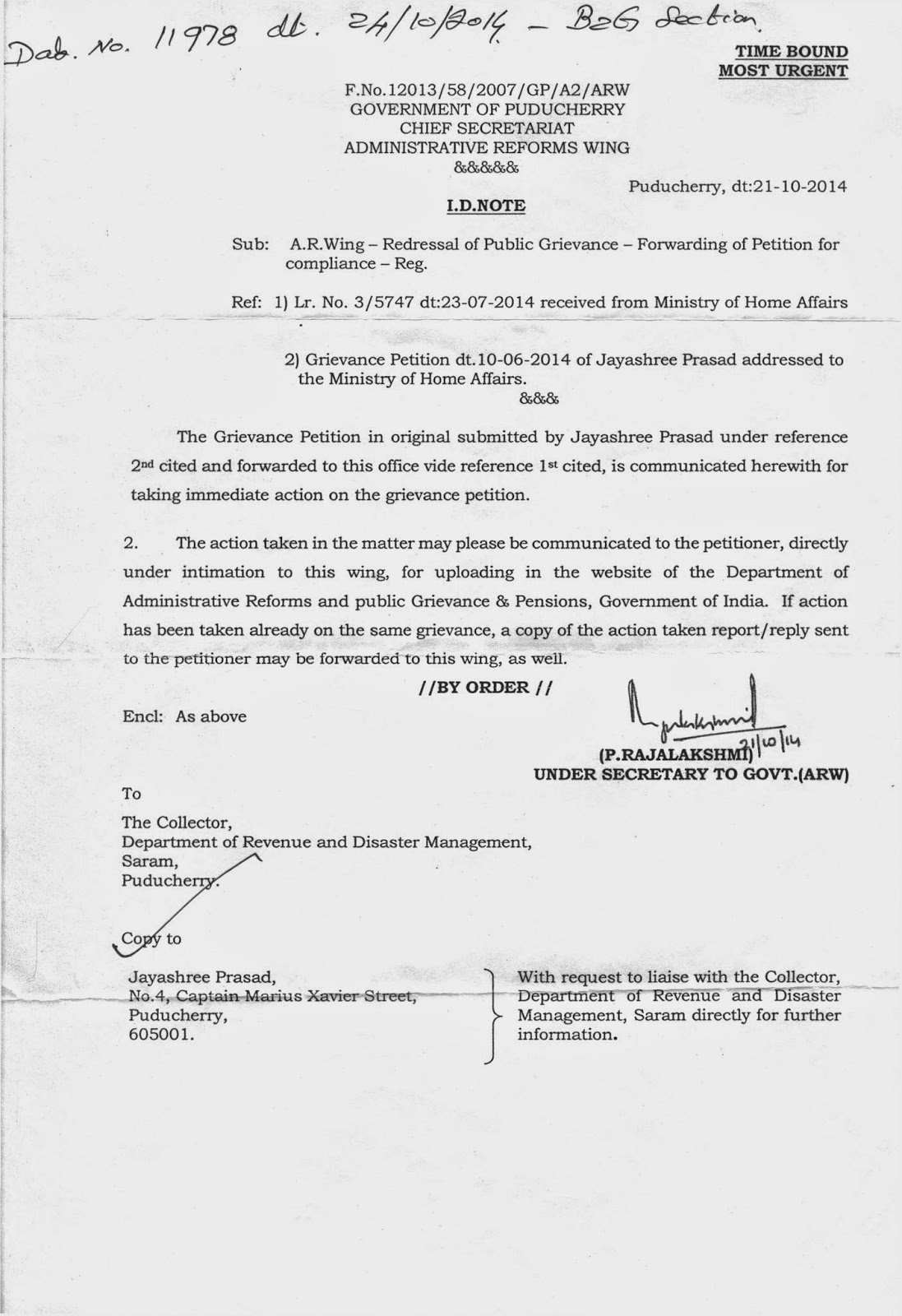 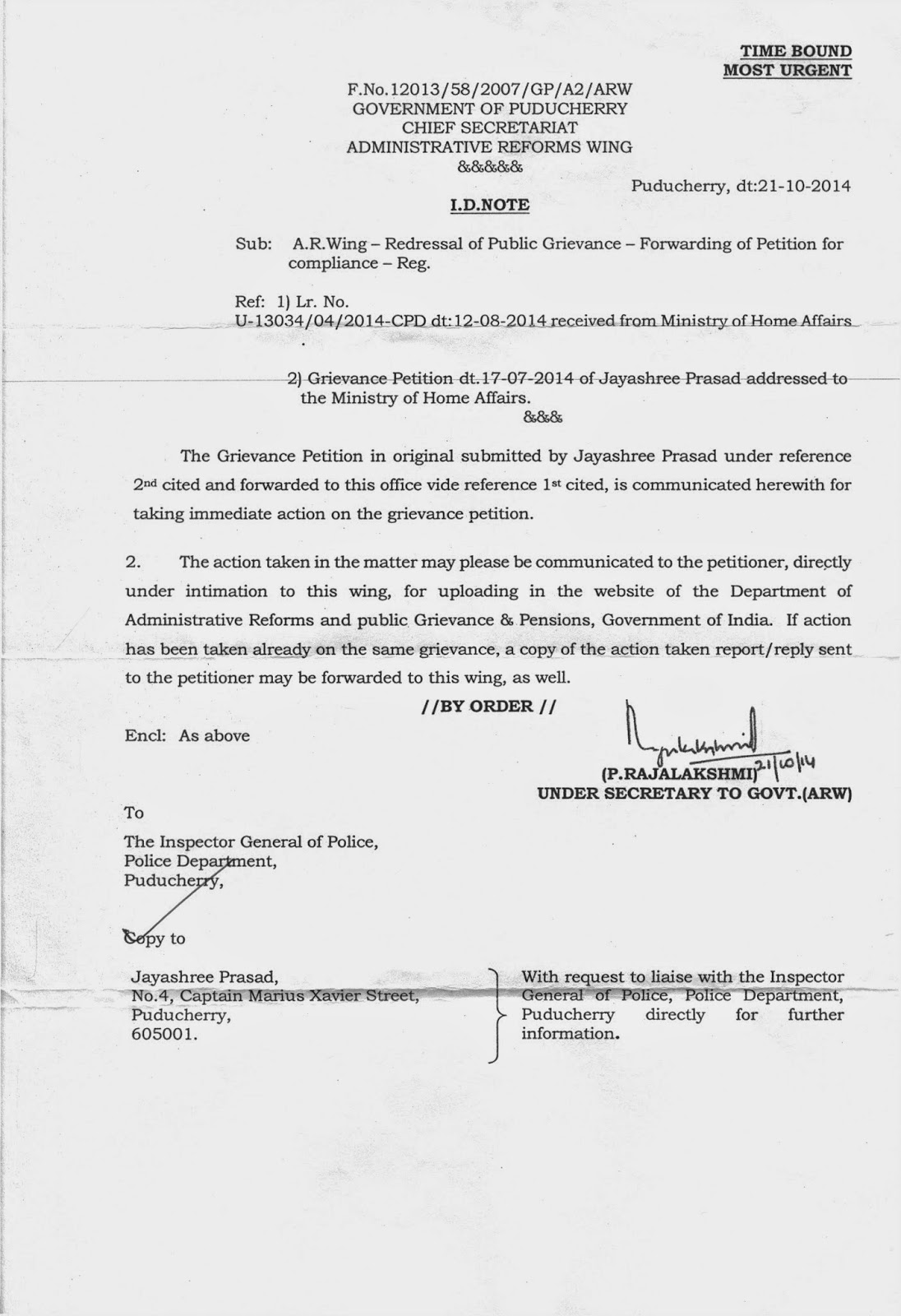